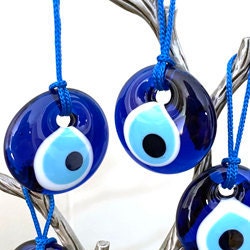 The evil eye is a fear that spans the ages from Greek mythology to Irish lore. It's believed to be a stare that brings misfortune to the receiver for reasons of envy, jealousy, anger, or dislike. The evil eye is not an amulet, it's a curse.

To wear an evil eye amulet, it's best to take a moment to focus on your intent. It's believed that wearing an evil eye amulet carelessly might render its protection useless or you might even receive a more potent curse.

Wear an evil eye amulet always or at times you need more protection. It's empowering to put on and is a reminder to not let the bad in. It's also a way to practice your magic daily. Say a prayer or a few words of protection as you take time to put it on making it your personal ward. 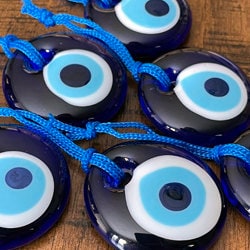 Why blue? The Greek philosopher Plutarch mentioned those best at delivering the curse were blue eyed. Blue (and green) is a rare eye color in regions where the evil eye curse belief is popular.

The Witches’ Almanac in the seventies vol 2

The History of the Evil Eye, an Ancient Symbol of Protection by Stellene Volandes

The strange power of the ‘evil eye’ by Quinn Hargitai

Your Eyes Really Are the Window to Your Soul by David Ludden Ph. D.

Learn About the Greek Evil Eye (Mati) by NHS My Parea

What You Need to Know About the Greek Evil Eye (Mati) by GreekBoston.com

Xematiasma: Getting Rid of the Evil Eye by Amber Charmei