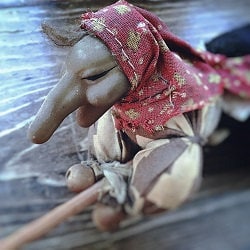 Said to be from Norwegian traditions brought to America with early settlers, kitchen witch dolls are good witches said to bring warmth and joy to the kitchen. The kitchen witch whirls her magic around the kitchen creating an atmosphere of love and whimsy so that no bad witch who curdled milk and leavened no breads had powers there.

Rice, beans and toast won't burn, pots never boil dry and there will never be too much salt when baking, boiling or stewing.

The legendary secret of goof proof cooking the famous kitchen witch. For centuries, Norwegians have hung this good witch in their kitchen. They believe she has the power to keep roasts from burning, pots from boiling over, and sauces from spilling.

And this one from Ampro International Inc.

The Kitchen Witch legend originated in Scandinavia centuries ago. It is said that the Kitchen Witch has the magical power to bring good luck and assure a smooth running kitchen. Just hang or stand her in your kitchen and as legend has it:

Eggs won't stick to the pan 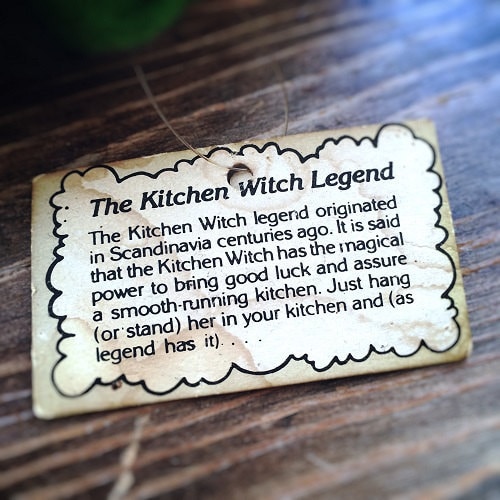 (Tag on a Kitchen Witch doll from Ampro International Inc.)

Happy you'll be with a KITCHEN WITCH FAIRE,

Both day and night!

that's what CIN-CIN is made of.

Chuckling, laughing and having a ball,

bringing good luck to one and all.

Flying high on a cinnamon stick,

and rest her weary broom a bit.

She'll keep away those pesky things

that seem to bug your plants in Spring.

And, green they'll be in Winter, too,

for this little witch has a special brew.

Just wrap her around any pot, old or new,

and good luck she'll bring, all the year through.

While researching this post I came across a will for a man by the name of John Croginton dated 1599. In his will he leaves his son a heirloom of, "one witche in the kytchyn...". Some sources think this witch in the kitchen is a doll, but I don't think any person in the late 1500's would list a poppet in their will during the witch hunts. I'm thinking maybe it's a piece of furniture in the kitchen called a, “witche” as some furniture has associated names like the, “baker’s rack” and “butcher’s block”. I reached out to a man that specializes in Tudor furniture to see if he has come across any furniture called a, “witche”. I haven't heard back, but I will update this post if I do. UPDATE: I received a reply. He seems to think it's a transcription error and that the word in the original document was, "hutche" as there is no furniture during that time called a, "witche".

I also found a special collections list from 1816-2003 that mentioned a kitchen witch doll in the archives at the University of Sheffield library that lists in Box F 11/83: "Kitchen Witch” (modern commercially produced straw doll from the USA)." hinting to some kitchen witches in America being made from straw. 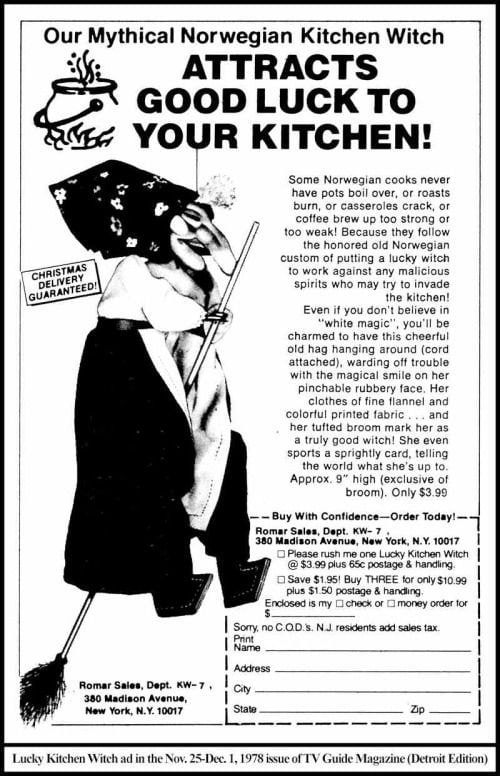 (1978 advertisement in TV Guide Magazine referring to kitchen witches as being Norwegian in origin.)

I wanted to confirm kitchen witch dolls were from Scandinavia. I called a store I shop at often called, "Bestemors" in Connecticut. I spoke with a lady there who confirmed they are Scandinavian and she actually purchased one 30 years ago from the store when she first worked there. Her kitchen witch had a pantyhose face, a big nose, wild hair, and a burlap apron. I asked if kitchen witches go by another name and she said I could try, "babushka". Babushka? I remember that name from the old films about Baba Yaga I watched on YouTube. Babushka means a folded, triangle, headscarf that’s tied under the chin. It’s also a name for elderly Russian and Polish women, especially a grandmother. I did a Google search to see what popped up for, "babushka doll" and Russian nesting dolls seemed to be the big hit. That's not what I was looking for so I did another search for, "baba yaga kitchen witch" that turned up some better results of big nosed ceramic witch canisters. I wasn't there yet so I did one last search and concluded they are probably from Norway. The lady at Bestemors also mentioned you should never buy a Kitchen Witch for yourself, that it should be given to you. I told her I purchased one from an antique market and she said that's fine, because it's second hand. I believe she was hinting that it's bad luck to buy one for yourself.